This is HBO’s second attempt to enter the gaming world, the first one being The Sopranos video game, which was a failure.  Now Telltale attempts to bring Game of Thrones into the gaming world, HBO’s new cash cow.  The game starts out at the Red Wedding, which is where, as many Game of Thrones fans know, Rob Stark dies.  Since the lord of the Forresters and the main heir perish as well, a child inherits the responsibilities.

Sadly, that’s usually how things went down during the time period the game models itself after.  Apparently, boys who haven’t gone through puberty made better rulers than fully-grown women.  Though I do like how the game shows that things are changing and how hard it is for Ethan, the new lord, to follow in his father’s footsteps at such a young age when all he wants to do is keep playing with his siblings.  Even if his fate is unavoidable which, I admit, almost made me cry.  As for what that is, keep in mind that you’re dealing with Ramsay Snow.

For those of you unfamiliar with Game of Thrones, Ramsay Snow is someone who skins people alive in his spare time.

Definitely not someone you want to get on the bad side of.

As I mentioned, Ramsay Snow makes a few appearances throughout the game.  Let me tell you, he’s not the only Game of Thrones character who does so.  One of the Forresters works as Lady Margaery’s handmaiden, so you can bet that you’ll be seeing much of the Lannisters.

I’ll admit, I knew that characters from Game of Thrones make an appearance but I thought that it would be as cameos.  I had no idea that they would be a huge part of the storyline.  However, I will say one thing. As scary as Cersei and Ramsay are on the show, having to deal with these people makes them far more intimidating.

The game play is standard Telltale Games.  You make choices for each character you play with some of them supposedly having a huge impact on the game.

I’m not sure how big yet, since I’ve only played the first chapter.  I’ve already told you that one of the characters has an unavoidable fate, no matter what you do.  At some points, you can explore certain places and read the codex for background information.  Unlike other Telltales games where you only take control of one character, this one let’s you control different members of the House of Forrester at different times.  So far, their situation and personalities seems very similar to the Starks but I’m hoping the game will expand on the Forresters so that they’re more than just Stark copycats.  You can even compare your choices with those of the other players though, let me tell you, I’ve found myself restarting the game many times over fear that I’ve made the wrong choices. 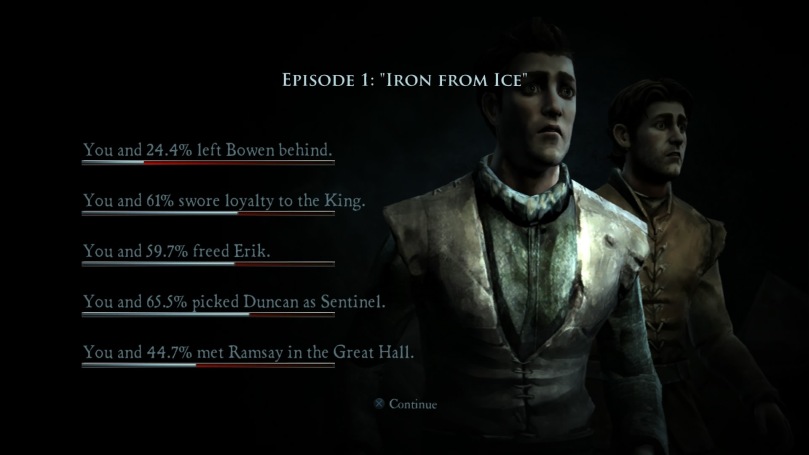 This game is intriguing but emotionally overwhelming.  I give it 7 out of 10, a promising start for Telltale’s Game of Thrones adaption.