Recent graduate of Vet school, Amy Care, now has two options.  She can either take a job at the big city vet clinic, or take over her grandfather’s small business.  What will she choose?

I’m sure many of you already predicted in your heads what Amy will pick at the end.  However, the game is less about Amy’s decision and more about the journey she takes to get there.  Spoiler alert, the big city people see animals more as decoration than living things as opposed to the fine people of Snuggford.  I’ll admit that it is rather simplistic, but I’ll talk about this later. There’s one bright spot about the big city. Said bright spot is a non-profit animal shelter Amy’s co-worker volunteers at in his free time.  Only problem is that they have trouble finding donors, an issue also shared by a real life organization I volunteer at called Second Chance SPCA. Though they never say if the shelter in the game is a no kill one or not, while the one I volunteer at actually is a no kill rescue.  Despite the light-hearted nature of the game, some scenes might upset you. I will tell you that the writers drew inspiration from real life events and talk about the controversy behind such events as horseracing. They also discuss people who throw away animals as if they are throwing away the garbage.

Like the previous games in the series, this one also has a romantic subplot.  However, this subplot actually symbolizes Amy’s naivety and character growth. Jasper is Amy’s first boyfriend and is a rich spoiled brat used to getting his way.  It’s similar to how the Pawsitiviy Pet Clinic turns out to be more about making money than they are about helping animals. Jack is the hard-working man who works at the Pawsitivity Pet Clinic for a paycheck but still cares about animals.  He’s also the one who introduces Amy to the animal rescue while Jasper is the one who gets her a job at the stables. The former is about helping animals while the latter is more about grooming the horses to help the humans. Amy also has two friends, one who represents the superficiality of the big city and another who represents the more modest small-town life of Snuggford.  However, the former turns out to be more than just superficiality as she adopts an abandoned puppy who takes a liking to her. Proving that there is a shining light in the big city, which is small but still there.

I said earlier that the game is rather simplistic in its view of small towns good and big cities bad.  The small town in question is Snuggford and it has a Mayberry vibe. Everybody knows each other, everybody gets along and everybody treats their animals well.  The big city is far crueler where one of your jobs is to dye a puppy pink. I am not kidding about that. Be prepared for two spoiler alerts. The first is that you have to expose the owner of the Pawsitivity Pet Clinic for drugging a racehorse. 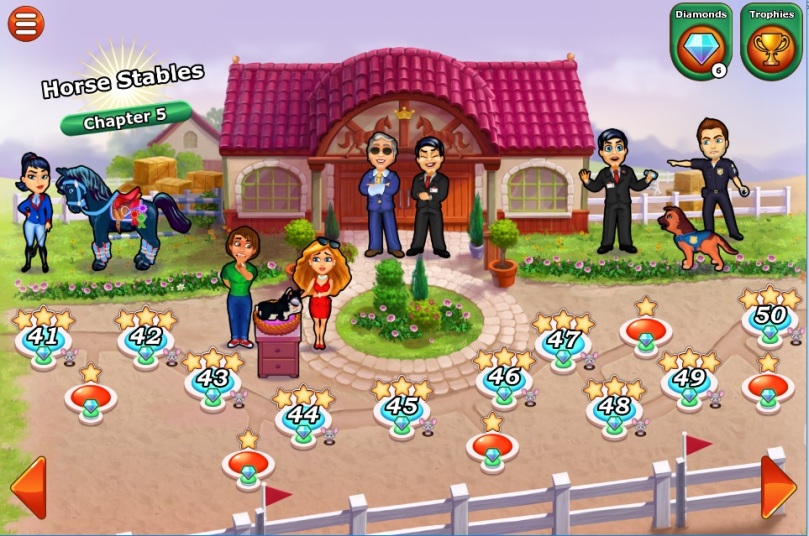 The second is that the original owner of the pink puppy abandons him or her at the animal shelter. Don’t worry, the puppy finds another home with Amy’s big city friend. As much as I wish real life could be this simplistic, it’s not. The truth is small towns are every bit as capable of being cruel to animals as big cities are, such as this farm of horrors found in Massachusetts. It’s just that the big city and sports such as horse racing have more of a reputation for it.

The game play has similarities to Delicious, yet also carries a Heart’s Medicine vibe.  People either bring their pets in for a checkup or go to the counter to purchase items. You give the people what they want and check them out of the clinic.  In the case of the animals, you sometimes have to play mini-games.

After you’ve checked out the people who brought their animals, you have to clean up after them.  Get the first star to advance to the next level but try for all three, if you feel lucky. Each level comes with a special event you can complete for diamonds and a find the mouse mini-game.  You can use the diamonds to purchase gifts for Newton, Amy’s pet bird.

You can also purchase upgrades in-between levels to make your game play experience easier. Throughout the game, you can earn trophies if you meet certain conditions.

This game is addictive, but has its tearjerker moments.  I give it 9 out of 10; some of the scenes upset me in a good way.