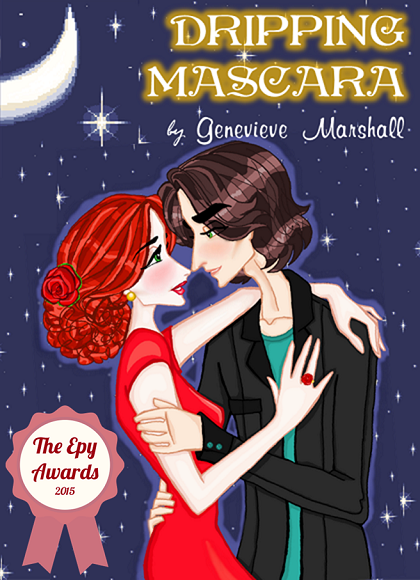 Dripping Mascara is a story on the iPhone app, Episode: Choose Your Story, about a young girl named Shelley who moves to California to reunite with her childhood friend, Matthew.  She also discovers that she has magical powers and is the reincarnation of a Queen.  Believe me, it’s not nearly as stupid as I make it sound.

Just so you know, this is not a review.  Genevieve, the author, has a birthday today and I thought I could post a message on my blog.  I consider apps on your phone video games and, since Dripping Mascara is a story on the Episode app, it qualifies.  I first heard of her when I saw the winners for the Valentine’s Day contest and played Wasted Roses.  Through there, I went to play Dripping Mascara and discovered a whole new world through Episode.  I met many people through Genevieve and became an honorary member of the Episode Community.  It’s because of her that I decided to post all of my original fiction on Episode, even if I want to publish it in the future.  Even if my work is still being outlined.

So, Happy Birthday Genevieve and thank you for introducing me to a wonderful community.  As for the rest of my readers, be sure to check out Dripping Mascara.

This is HBO’s second attempt to enter the gaming world, the first one being The Sopranos video game, which was a failure.  Now Telltale attempts to bring Game of Thrones into the gaming world, HBO’s new cash cow.  The game starts out at the Red Wedding, which is where, as many Game of Thrones fans know, Rob Stark dies.  Since the lord of the Forresters and the main heir perish as well, a child inherits the responsibilities.

Sadly, that’s usually how things went down during the time period the game models itself after.  Apparently, boys who haven’t gone through puberty made better rulers than fully-grown women.  Though I do like how the game shows that things are changing and how hard it is for Ethan, the new lord, to follow in his father’s footsteps at such a young age when all he wants to do is keep playing with his siblings.  Even if his fate is unavoidable which, I admit, almost made me cry.  As for what that is, keep in mind that you’re dealing with Ramsay Snow.

For those of you unfamiliar with Game of Thrones, Ramsay Snow is someone who skins people alive in his spare time.

Definitely not someone you want to get on the bad side of.

As I mentioned, Ramsay Snow makes a few appearances throughout the game.  Let me tell you, he’s not the only Game of Thrones character who does so.  One of the Forresters works as Lady Margaery’s handmaiden, so you can bet that you’ll be seeing much of the Lannisters.

I’ll admit, I knew that characters from Game of Thrones make an appearance but I thought that it would be as cameos.  I had no idea that they would be a huge part of the storyline.  However, I will say one thing. As scary as Cersei and Ramsay are on the show, having to deal with these people makes them far more intimidating.

The game play is standard Telltale Games.  You make choices for each character you play with some of them supposedly having a huge impact on the game.

I’m not sure how big yet, since I’ve only played the first chapter.  I’ve already told you that one of the characters has an unavoidable fate, no matter what you do.  At some points, you can explore certain places and read the codex for background information.  Unlike other Telltales games where you only take control of one character, this one let’s you control different members of the House of Forrester at different times.  So far, their situation and personalities seems very similar to the Starks but I’m hoping the game will expand on the Forresters so that they’re more than just Stark copycats.  You can even compare your choices with those of the other players though, let me tell you, I’ve found myself restarting the game many times over fear that I’ve made the wrong choices.

This game is intriguing but emotionally overwhelming.  I give it 7 out of 10, a promising start for Telltale’s Game of Thrones adaption.

After having Paige, Emily and Patrick move to a house that they like to call a fixer-upper.  When they get on the bad side of one of their neighbors, she vows to have the house condemned.  Can Emily and Patrick get the house up to code before they lose it forever?

The game has a dilemma and Emily and Patrick do have to struggle to end it.  I do mention that they get on the bad side of one of their neighbors due to a stage mom’s child injuring herself in their house.  Let me tell you that said stage mom is a woman who has power in their neighborhood to the point where she can ruin a man’s life for not voting for her daughter in a pageant.  However, I have to admit that she does have a point about condemning Emily and Patrick’s house.  Sharon’s daughter (the stage mom in question) didn’t simply bang her head on a table; she fell down a hole in the floor caused by a fallen chandelier.  Their house is a deathtrap and I really can’t blame Sharon for wanting to have it condemned.  Yet, we’re supposed to see Sharon as unreasonable for trying to shut down a death trap.

Another problem is, I can’t feel too much sympathy for Emily and Patrick when the former’s parents let them stay in their house while all this drama’s going on and will let them stay permanently in the event that their house turns out to be condemned.  In one level, Emily complains about how her house is condemned, many people are taking the side of their enemy.  Emily even mentions how she and Patrick will be living with her parents until they turn sixty.  Many people can find themselves in a situation like this and don’t have their parents to turn to.  In a promo for Two and a Half Men, I saw one of the character’s beg his mother to take him in because he’ll be out on the street.  The mother blew him off and told him to pick a street in Beverly Hills so she can visit him.  To someone like that person, Emily would sound like a whiner.  In this game, Emily’s isn’t the only one with problems.  One section has to deal with a guy coming to terms with the fact that his daughter is not the great adventuring scout he wants her to be and that technical knowledge is every bit as important as the hands on activities.  Another has a guy who runs an amusement park dealing with children who don’t want to work there and would rather spend all summer playing.  The third section deals with an overprotective parent dealing with being a single mom to her only son.  One who is also trying to have a life outside of her son.  The fourth section is about a stage dad who dreams of his daughter being a great Olympic skier, one she doesn’t share.  Every section is about a parent’s relationship with their child and, all the while, a stage mom is trying to ruin Emily and Patrick.

The game play is like the previous ones in the Delicious series with you delivering food to your customers, trying to get the highest score possible in each level, and purchasing upgrades in-between.

There are differences, such as being able to change the menu for your restaurant by serving enough of a product.

Each level also comes with an extra task for you to complete.  Do so to get a diamond for each level and use them to purchase items for your house.  In the case of Paige’s room, you have to fulfill certain conditions to get a trophy.

While this was a fun addition to the game, some of the rooms in the house seemed a little too traditional for my taste.  For instance, why does Patrick get his own man cave and Emily doesn’t get a woman cave?  I did some research on the concept and, apparently, the idea is for the man to stick all of his stuff in one room while the woman decorates the rest of the house.  The problem is this idea enforces gender stereotypes.  As a woman, I do have a love for flowers, candles, stuffed animals and dolls (provided that they’re Monster High, Ever After High, or DC Superhero Girls products) but I also like action figures, video games, Game of Thrones and super hero posters.  Therefore, I find the idea that I wouldn’t allow such items in my house insulting.  Another problem is the idea that the man needs to get away from the stress of it all but women have the same desire.  Some of the things said about the objects in Patrick’s man cave enforce gender stereotypes, such as Emily making a remark about how most wives hate it when their husband plays video games.  If I did get married (big if), the only thing I’d hate about it is if my husband hogged the game cartridge and wouldn’t let me play.

Like many games in the Delicious series, you can pay extra for the platinum version.  One of the extras it comes with is more levels about Emily throwing a housewarming party and finding a nanny for Paige.  Since Francois has his own plot about finding his calling in life, you can imagine that he’s the obvious choice.  However, I do have one question.  What happened to Francois’s interior decorating business?  For those of you who don’t remember, Delicious 2 introduced him with this pitch.  Sharon is also part of the plot, but this time as an ally to Emily and Patrick.  However, she doesn’t lose the traits that made her a threat to them, as so often happens when the bad guy joins the side of good.

This game is fun if not a bit traditional.  I give it 7 out of 10, a fantastic addition to the Delicious series.