Mina has been sleeping for years in a crystal prison.  Now that she’s awake, it’s time for Mina to unlock her true potential as the Death Orb.  Whether she finds romance or corruption is all up to you.

What personality Mina takes is based entirely on what path you pursue.  You can go on Rune, Cauis, Aurelius, Varian, a secret character or the alone path. 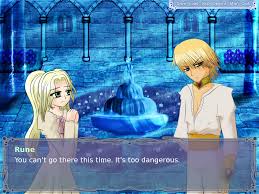 Each character has a minimum of two endings and only one of them is the true ending of the game.  Some paths Mina tended to be annoying while on others she was a very strong character.

This game is interesting and fun.  I give it 6 out of 10; not a bad way to spend your time.