Like the fairy tale of Cinderella, Cinders is under the rule of her stepmother and stepsisters.  Only this time she’s not going to be a helpless doormat and wait for some magical being to save her life.

Everyone knows the tale of Cinderella and the most common complaint about it from feminists like me; she doesn’t do anything.  In this game, Cinders has reached her breaking point and decided to do something.

She can choose the fairy tale end, but when she does, it will be her choice.  The stepmother and stepsisters also have a new take.  Instead of being one-sided villains, they all have their own back-story to explain how they became the way they did.  The romance options are also not the same.  The prince is a love interest but so are Tobias (shop owner and Cinders’ childhood friend) and Perrault (honorable captain of the guard).

During the game, you are the one who makes the choices.  What you pick will shape Cinders’ personality.  You are also responsible for who she ends up with and her relationship with her stepmother and stepsisters.  Does she mend the fences between them or does she let her bitterness get the best of her?  You also get to choose whom she ends up with and which of her fairy godmothers she trusts.  You can pick Madame Ghede, a witch withdrawn from society,

or the fairy, who’s granted wishes come with a price.

Every choice you make affects not only the variation of the four endings you get, but what reward you collect. 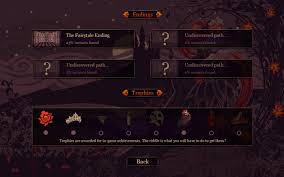 The game is fun and intriguing.  I give it 8 out of 10, a feminist take on a classic fairy tale.