Princess Elodie’s mother has just died but she doesn’t have time to grieve.  14-year-old Elodie has to train to become the next ruler of Nova.

Will she become the queen her people are looking for, or become corrupted by power?  Will she even survive to reach her coronation?

Elodie has a difficult road ahead of her and it shows.  She has all the luxuries of royalty but it also comes with responsibilities.  Every action she takes determines the fate of Nova.  Every decision she makes shows if she is capable of the task given to her.  Various subplots can show her relationship with the other characters.  Her relationship with her father is very special because he’s trying to point his daughter in the right direction, yet he still sees her as his little girl.  There’s also a fantasy element to the game where Elodie discovers that she has a hidden power inside her and can train it if she gets the crystal.

This isn’t your typical princess game.  You’re not just wearing pretty dresses, having parties and falling in love.  You actually have responsibilities as a ruler.  You can train in a variety of subjects ranging from the athletic to the intellectual.

If you raise your stats enough in a specific skill, you unlock a new outfit and only one of them is a beautiful dress. 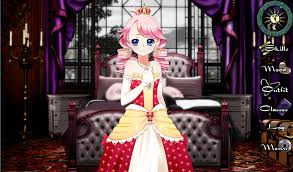 You can attend parties in the game but if you haven’t trained yourself in social skills, well let’s just say that the other nobles won’t think well of your abilities as ruler.  You can even marry but it will be more for political gain than for love.  During the game, various scenarios will test whether you’ve trained Elodie enough in certain skills.

You can also take a break in your studies to do an activity of your choice.  What you pick affects your mood.  The choices you make affect what type of ruler Elodie will become.  If you don’t make the right choices or fail to train Elodie enough in certain skills, she might not survive to her coronation.

The game is challenging yet addictive.  I give it 8 out of 10, an original take on a game about royalty.